New year and another attempt at a blog. At least I got onto wordpress this year, which is more than can be said for last January. Being ill is paradoxically my principal motivation as I cant do much else. I’m feeling really sorry for myself. I dont get ill much, and very rarely get a cold. I’ve often wondered if its a side effect of being fit. Not so on the edge fit that you are prone to catch any bug going, but so fit that you have the robustness to fight stuff off. Anyway. Im well and truly ill now. My youngest daughter Imogen had a bad cough over Christmas and half of the schools in Ilkley seemed to be semi populated as a result of the bugs that were doing the rounds. I thought I had got away with it, but after the brilliant Ripley Castle Cyclocross on New Years day, I could feel my throat getting ticklish and by the evening had a full on streaming cold. 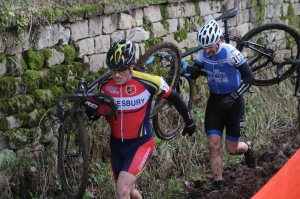 I should have just stayed in bed, but because it was my last cross race of the season, I went to Todmorden to race in the war of the roses. I’d done a couple of recce laps, and felt ok actually. On the first lap of the race, I had a good start and was about 4th or 5th Vet40 going up the cobbles. I fell on a slow right hander which took me my surprise as It was grippier earlier in the day. I should have been a bit more wary after that, but wasn’t. The descent is very fast and steep, down a gravel path. I tried to adjust my line going around a kink in the path and went down hard on my right hand side. Strava later revealed my speed before the crash at 29.9 mph. It really fucking hurt. The kind of hurt where you stay down for a few minutes trying to work out what happened and the adrenaline hides the pain for a few seconds. Gravel rash all down my right hand side. Skinsuit ripped. Mech hanger bent and handlebars/shifters/stem in a new asymmetrical set up.

So next up. A few nights ago I was feeling a bit better. The cold had got to the stage where the snot was green and coming out in tissue loads – a good sign. The rash was scabbing up nicely and I’d even had a useful hour and bit of physiotherapy to sort out a few of the niggles that had developed during the racing season. (thanks Brit. brittatesportstherapy.co.uk)  I blew my nose and it was like an small explosion in my right ear. I was deaf in my right ear and my balance was all over the place. Then over the course of the evening the right side of my head became more and more sore; a dull nagging earache which made sleep impossible. The next morning I went to the GP’s who looked in my ear and said ‘good god’ or some thing like that. I’d burst my eardrum. Apparently it may need surgery. So I’m now on painkillers and antibiotics, waiting to find out what fate awaits my right eardrum.

This post hasn’t got much to do with cyclocross, but after Tod, I was planning to have two weeks of not doing anything at all. This wasn’t really what I had in mind.

IT'S A HILL, GET OVER IT
TrekkingSkills.co.uk

Opinion on the world of cycling and commentary on my training

Thinking aloud about music & cycling. Expecting neither to be right, nor listened to.

Life, love and my boyfriends bike

When in doubt, go furthur